How to make Metal Parts？ 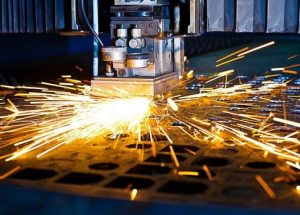 Stamping (also known as pressing) is the process of placing flat sheet metal, either in blank or coil form, into a stamping press where a tool and die surface forms the metal into a net shape. Stamping includes a variety of sheet-metal forming manufacturing processes including punching using a machine press or stamping press, blanking, embossing, bending, flanging, and coining. This could be a single-stage operation where every stroke of the press produces the desired form on the sheet metal part or could occur through a series of stages. The process is usually carried out on sheet metal, but can also be used on other materials such as polystyrene. Stamping is usually done on cold metal sheet. See Forging for hot metal forming operations.

Forging is a manufacturing process involving the shaping of metal using localized compression forces. The blows are delivered with a hammer (often a power hammer) or a die. Forging is often classified according to the temperature at which it is performed: cold forging (a type of cold working), warm forging, or hot forging (a type of hot working). For the latter two, the metal is heated, usually in a forge. Forged parts can range in weight from less than a kilogram to hundreds of metric tons. Forging has been done by smiths for millennia; the traditional products were kitchenware, hardware, hand tools, edged weapons, cymbals, and jewelry. Since the Industrial Revolution, forged parts are widely used in mechanisms and machines wherever a component requires high strength; such forgings usually require further processing (such as machining) to become a finished part. Today, forging is a major worldwide industry.

Press forging works by slowly applying a continuous pressure or force, which differs from the near-instantaneous impact of drop-hammer forging. The amount of time the dies are in contact with the work piece is measured in seconds (as compared to the milliseconds of drop-hammer forges). The press forging operation can be done either cold or hot.

Casting is a manufacturing process in which a liquid material is usually poured into a mold, which contains a hollow cavity of the desired shape, and then allowed to solidify. The solidified part is also known as a casting, which is ejected or broken out of the mold to complete the process. Casting materials are usually metals or various cold setting materials that cure after mixing two or more components together; examples are epoxy, concrete, plaster, and clay. Casting is most often used for making complex shapes that would be otherwise difficult or uneconomical to make by other methods.

Casting is a 6000-year-old process. The oldest surviving casting is a copper frog from 3200 BC.

Metal injection molding (MIM) is a metalworking process by which finely-powdered metal is mixed with a measured amount of binder material to comprise a “feedstock” capable of being handled by plastic processing equipment through a process known as injection molding. The molding process allows dilated (oversized due to binder) complex parts to be shaped in a single step and in high volume. After molding, the powder-binder mixture is subjected to steps that remove the binder (debinding) and sintering to densify the powders. End products are small components used in various industries and applications. MIM is typically cost-effective for small, intricate, high-volume products which would otherwise be quite expensive to produce by alternate or classic methods. The variety of metals capable of implementation within MIM feedstock is broad.

CNC Machining is a process used in the manufacturing sector that involves the use of computers to control machine tools. Tools that can be controlled in this manner include lathes, mills, routers, and grinders. The CNC in CNC Machining stands for Computer Numerical Control.

There are many kinds of machining operations, each of which is capable of generating a certain part geometry and surface texture.

In turning, a cutting tool with a single cutting edge is used to remove material from a rotating workpiece to generate a cylindrical shape. The primary motion is provided by rotating the workpiece, and the feed motion is achieved by moving the cutting tool slowly in a direction parallel to the axis of rotation of the workpiece.

Drilling is used to create a round hole. It is accomplished by a rotating tool that typically has two or four helical cutting edges. The tool is fed in a direction parallel to its axis of rotation into the workpiece to form the round hole.

In boring, a tool with a single bent pointed tip is advanced into a roughly made hole in a spinning workpiece to slightly enlarge the hole and improve its accuracy. It is a fine finishing operation used in the final stages of product manufacture.

Reaming is one of the sizing operations that removes a small amount of metal from a hole already drilled.

In milling, a rotating tool with multiple cutting edges is moved slowly relative to the material to generate a plane or straight surface. The direction of the feed motion is perpendicular to the tool’s axis of rotation. The speed of motion is provided by the rotating milling cutter. The two basic forms of milling are:

Other conventional machining operations include shaping, planing, broaching and sawing. Also, grinding and similar abrasive operations are often included within the category of machining.

3D printing, also known as additive manufacturing (AM), refers to processes used to create a three-dimensional object in which layers of material are formed under computer control to create an object. Objects can be of almost any shape or geometry and are produced using digital model data from a 3D model or another electronic data source. Thus, unlike material removed from a stock in the conventional CNC machining process, 3D printing or AM builds a three-dimensional object from computer-aided design (CAD) model (STL, STP, STEP, SLDPRT) by successively adding material layer-by-layer.

There are many metal additive manufacturing methods and will be the subject of a separate post.